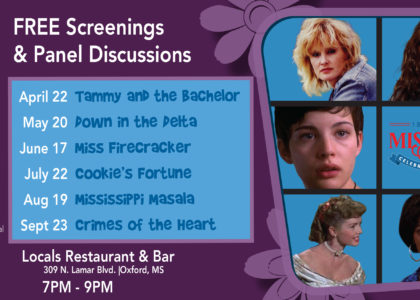 April 13, 2017–Oxford Film Festival is partnering with Sarah Isom Center and Mississippi Humanities to host a six-month series of “Miss Films” free screenings and discussion panels. This event is part of the bicentennial celebration as Mississippi turns 200 this year.

The screenings and discussion panels will take place at Locals Restaurant & Bar in Oxford at 7 p.m. once a month April through September.

“This is a great way for us to celebrate and examine the role of women on film in particular with films related to or filmed in Mississippi,” Executive Director Melanie Addington said. “This is part of a larger discussion we are having as the festival in how to better provide opportunities for women in this industry and in this state. We are proud to partner with the Sarah Isom Center who will be leading the panel discussions. Their expertise should lead to some fantastic conversation.”

The movie tells the story of an unsophisticated young woman from the Mississippi swamps falls in love with an unconventional southern gentleman. discussion panel following the screening is “The Barefoot Housewife or How Women were perceived in the 1950s”.

The May 20 screening is Down in the Delta (1998) starring Alfre Woodard. In the film Rosa Lynn sends her druggie daughter Loretta (Woodard) and her children away from the big city to live with their uncle Earl in the ancestral home in rural Mississippi. The panel following the movie is titled “African American Women in Mississippi and Family Legacy”.

Carnelle (Hunter) isn’t happy with her life, so in order to improve herself she enters a local beauty contest, trying to emulate her cousin’s win many years ago.  “Beauty Pageants of Mississippi and the Gaze of Femininity” is the panel following the movie.

The July screening is Cookie’s Fortune (1999) starring Liv Tyler on the 22nd. The film follows conflict in the small town of Holly Springs which arises when an old woman’s death causes a variety of reactions among family and friends. The panel following Cookie’s Fortune is titled “Mental Illness in Women in Mississippi, A History”.

The fall screenings are August 19 and September 23. The August movie screening for the 19th is Mississippi Masala (1991) and stars Sarita Choudhury. Mississippi Masala is about an Indian family is expelled from Uganda when Idi Amin takes power. They move to Mississippi and time passes. The Indian daughter falls in love with a black man, and the respective families have to come to terms with it. The panel following the screening is “Interracial Romance in the South”.

For the final screening on September 23 the movie Crimes of the Heart (1986) starring Jessica Lange, Sissy Spacek and Diane Keaton will be screened. Three sisters with quite different personalities and lives reunite when the youngest of them, Babe, has just shot her husband. The oldest sister, Lenny, takes care of their grandfather and is turning into an old maid, while Meg, who tries to make it in Hollywood as a singer/actress, has had a wild life filled with many men. Their reunion causes much joy, but also many tensions. The discussion panel to end the series is “The Southern Gothic Tragedy and Family”.

The Mississippi Humanities Council sponsored the movie series as part of the Bicentennial celebration. All screenings for this series are free but donations are accepted for the festival. Every film screening and discussion panel will take place at Locals Restaurant & Bar at 309 N. Lamar Blvd. on the Square in downtown Oxford from 7pm – 9pm.

The Oxford Film Festival was founded in 2003 to bring exciting, new, and unusual films (and the

people who create them) to North Mississippi. The annual four-day festival screens short and

feature-length films in both showcase and competition settings, including narrative and

narrative, documentary, animated and experimental shorts. The festival is a 501c3 not-for- profit