Oxford has many venues that can host meetings of all sizes. Whether corporate retreats, trainings or small conferences, there are facilities in Oxford that can accommodate you and your group’s needs.. If you would like to host an event in Oxford, please fill out the form below, or view our list of hotels below the form.

The Oxford Conference Center, which opened in 2004, features meeting and event space for 12-1200 people, a 300 -seat auditorium with full audio-visual, catering and full kitchen, business center, and an executive boardroom. Oxford Hall has over 10,000 sq. ft. of column-free space.

Host corporate meetings and events at our hotel near Ole Miss. Chancellor’s House is Oxford’s only boutique luxury hotel and the ideal location for your next event. From multi-day conferences in our Grand Ballroom to productive board meetings in our private board room or VIP team building retreats, our experienced staff is happy to coordinate events of any size.

“Our event venue will offer an elegant backdrop for a wide array of events. The ballroom has windows on every wall offering a view of the three-tiered fountain, two patios & a panorama of the golf course. Additionally, the ballroom space boasts five elegant chandeliers, hardwood flooring and is equipped with a drop down projector, screen and advanced lighting options to fit your special occasion.

We offer exquisite cuisine for intimate parties of 50 or an extravagant occasion for 400. Our chef and his culinary team have created catering suggestions, but we also offer our personal attention to create a unique and personalized menu.

We are ready to work with you on planning and hosting your next special event at our spacious event venue!”

From corporate meetings to birthday parties and cocktail receptions we can host it all! With over 7,000sq ft of event space, Courtyard is sure to be the ideal venue for your next gathering. Utilize our state-of-the-art AV equipment for your next conference or presentation or host your event on our rooftop to truly capture the sights of the Oxford Square & Ole Miss campus.

Holiday Inn Express is located just off Jackson Avenue West. The 15-20 guest breakfast room can be rented (available after 11am).

The Graduate Hotel in Oxford has ideal spaces for both social and business meetings.

Take a look at their website for a range of rooms that can serve as romantic wedding receptions, stellar banquets, corporate and government meetings, memory making reunions, and/or convention and specialty events. This boutique hotel in Oxford can accommodate meetings and events for groups small and large and are equipped with the latest technology to keep your meeting on point.

Graduate Oxford has award-winning cuisine that provides great tasting traditional Southern favorites with a refined twist using fresh local ingredients. The catering menu offers a variety of dishes perfect for a meeting, wedding and private event.  The culinary team at Graduate Oxford is dedicated to creating an outstanding experience for groups of all sizes.

The Inn at Ole Miss

The Inn at Ole Miss, Oxford’s only full-service hotel, is located on the beautiful University of Mississippi campus. Welcoming travelers since 1951, The Inn renovated and expanded its facilities with the completion of its 8-story tower in 2008. In addition to the 146 guest rooms, the property features an outdoor swimming pool, fully-equipped fitness center, free wireless internet, nightly shuttle service to downtown Oxford and complimentary breakfast.

With over 10,000 square feet of meeting space, The Inn at Ole Miss is the premier location among Oxford area hotels. With its spacious ballroom, technologically-advanced meeting rooms and in-house caterer, you will find all of the services and facilities necessary for planning the perfect meeting, conference or wedding.

Voted “Oxford’s Best Wedding Venue” for the last 3 years, we’d love to be a part of your next event. From formal receptions for 1000 guests to intimate, fireside dining for 50, The Jefferson offers beautifully decorated event spaces overlooking an eight-acre lake. The spacious 18,000 sq ft building includes a 7,200 sq ft column-free Grand Hall along with two additional 2,500 sq ft rooms suitable for wedding ceremonies, receptions, formals, or parties. With a built-in stage, one 40-foot long bar, stunning see-through fireplace, a spacious bride’s room and groom’s room, The Jefferson is the ideal setting for any event. The finishes throughout the building include a variety of reclaimed materials that add warmth and historic character to the venue. The Jefferson is located five miles from the Square and offers easy bus turnaround along with parking space for more than 650 cars.

Elizabeth Heiskell Catering is now in residence in one of the two kitchens at our venue. The second kitchen is a basic catering kitchen available for use by pre-approved caterers.

Elizabeth Heiskell was born and raised in the Mississippi Delta, an agricultural area bordered by the Mississippi River where food and fun go hand in hand. With her passion for food, fun, and adventure, Elizabeth started her culinary journey with courses at the Culinary Institute of American in Hyde Park, New York. Chef Heiskell has prepared food for such notables as the Duchess of York, Former Vice President Al Gore, Chef Thomas Keller, Priscilla Presley and the governors of Mississippi, Texas, and Arizona.

As Lead Culinary Instructor at the Viking Cooking School in nearby Greenwood, world headquarters of the Viking Range Corporation, she has represented Viking on exclusive Silver Sea cruises through Spain, Portugal, Hawaii, and has made multiple television and public appearances including The Home Shopping Network and the CBS affiliate out of Memphis, Tennessee. With all of her culinary events and classes, Elizabeth adds fun and vitality.

In 2011 Elizabeth moved from the flatland to the hills of Oxford, Mississippi. There, she and her husband, Luke, run Woodson Ridge Farm with a little help from their three girls. She also maintains her catering company, Elizabeth Heiskell Catering, now in its eighteenth year, through which she provides delicious, eats for events all over the Southeast.

Elizabeth is The Today Show Food Contributor. She has done appearances on Food Network’s The Kitchen, was a guest judge on the popular Food Network show, Chopped. She also has appeared on multiple television segments such as CMT’s Pickler and ben Show, the Hallmark Channel and Fox and Friends. Elizabeth has also been featured in Garden and Gun Magazine, Southern Living, Delta Magazine, Commercial Appeal, The Clarion Ledger and Taste of the South. Debutante Farmer is her bloody mary mix, that was born on Woodson Ridge Farms and winner of the coveted Southern Living Food Award for one of the best products in the South.

The Mill at Plein Air

Meetings:
A wonderful alternative to traditional meetings is The Mill at Plein Air.  The Mill offers several options that can fit small groups, or corporate functions of 300 people or more.  We have a commercial kitchen, in-house caterers, and housing up to 20 bedrooms for overnight groups.  The Mill opens on to a 3-acre park allowing outdoor activities to be a part of the meeting as well.
Weddings:
Plein Air offers the ability to get married and hold a unique reception all in one location.  The Chapel, (capacity 260), is built in the style of a chapel you might find in any small town in the south a hundred years ago.  It has tall ceilings, the stained glass windows are from a church in Pennsylvania, the pews from an old church in Virginia, and the floors from a warehouse in Charleston, SC.  Right out the door is The Mill – our reception venue capable of hosting up to 500 people comfortably.  With its 14′ tall ceilings and exposed brick walls, three bars, six bathrooms and two stages – The Mill is a gorgeous venue for wedding receptions.
Address: 4 Town Square Lane, Taylor, MS 38673
Tel: 662-234-3151
Website: http://themillatpleinair.com

Located on Camp Hopewell Road, this 2,850 sq ft former horse barn has been renovated for your event’s convenience and comfort. It has a multitude of gathering and/or dining spaces, two lounge/break away rooms, two bathrooms, a prep kitchen and a covered 12′ X 75′ back porch. There is also a 25′ half circle paved open air patio at East end of the barn.

Nestled in the trees down a private, secluded drive, Oxford Treehouse Gallery provides the perfect intimate setting for parties, receptions, workshops and meetings. A kitchen is available for food preparation as well as an apartment for on-site stays. The Gallery is an ideal location for a small gathering or a party of 75.

Yoknapatawpha Art Council’s home, the Powerhouse Community Arts Center, is a vintage 1928 brick and stone warehouse structure. In addition to YAC’s office, the center currently contains an exhibition hall and an 160-seat flexible theatre. The center is made available to other groups for parties, receptions, dances, banquets, conferences, workshops and seminars. Please refer to www.oxfordarts.com for usage information.

From Academic Affairs to Formal Functions, and Mellow Mixers to Planned Parties, Premier Lanes Entertainment Center offers plenty of all-occasion options right up your event-planning alley!  We work in tandem with our clients to address event needs and zero in on specifics including tailored catering menus, team-building experiences and more.  Please visit www.premierlanes.com or email salesoxford@premierlanes.com for group/event info. 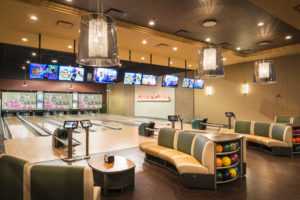 The University of Mississippi Museum

Located at the corner of 5th and University, The University of Mississippi Museum offers a unique Oxford venue. Two adjoining spaces extend your event planning capabilities. The art-filled Speakers’ Gallery is available for casual gatherings of 125 and table-seating for up to 50 guests. Rows of seats can accommodate up to 75.

The Lobby is available to feature a welcome space or lavish buffet with seating in the Speakers’ Gallery. The Lobby may be rented as a separate venue to welcome a standing-room-only event.  Arrangements may be made for staffed entry to additional galleries to allow your guests exclusive access during after-hour events.

Welcome to Woodson Ridge Farms, where it’s our mission to bring fresh, local vegetables to the kitchens of conscientious chefs at the finest local and regional restaurants, in Oxford, Tupelo, Memphis and Nashville, TN.  We also have wonderful Farm to Table events and dinners at our barn.  If you would like to have an event at our farm, , please contact us.