Oxford is known throughout the world for its literary heritage, chiefly due to William Faulkner, whose Yoknapatawpha stories have impressed readers to the extent that, since before his death in 1962, many have come here to see it firsthand.   Scholars have attempted to identify real places and people connected to Faulkner or his fiction, but find it difficult to find exact matches, with few certain exceptions: the Lafayette County courthouse in the middle of the Square, Phil Stone’s law office off the northwest corner of the Square, where the tourism office now resides, and Rowan Oak, Faulkner’s home, which is open to the public, a fifteen minute walk from the Square.   A walking tour of literary Oxford, which I encourage, might start on the square.

On the Square: Our office (1013 Jackson Ave E) was Phil Stone’s law office; most people know him as Faulkner’s close friend and mentor. It’s said Stone’s secretaries typed up some of Faulkner’s early works. There’s also a photo located in the back hall of Stone and Faulkner sitting in what is now the Tourism Director’s office. If you’re visiting during the week, walk over to City Hall where Faulkner’s voters registration, typewriter and some photos are on display in the lobby. A new stop on the Square is the Chancellor’s House. The hotel now has the Cofield Reading Room where the exhibit “Cofield on Faulkner” is displayed along with two busts by Bill Beckwith.

Walking to Rowan Oak from the Square: if you get directions via South 11th St., Faulkner’s childhood home (not open to the public) is about five blocks away, the only house set far back on a long narrow lot on 11th Street.   Rowan Oak is on Old Taylor Road, three blocks west of South Lamar.   (If you drive it’s easier to go from the Square down South Lamar and turn right at Old Taylor Road.) 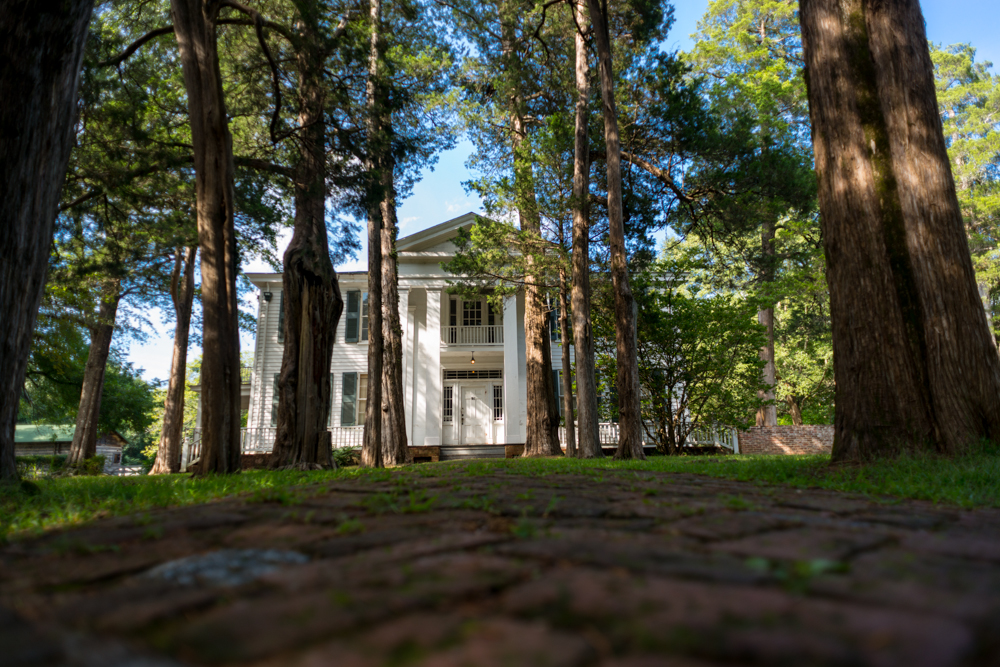 From Rowan Oak: many enjoy a walk through Bailey’s Woods (ask staff at Rowan Oak for the way), a 30-acre woods in the heart of Oxford.   Much of the flora there will be familiar from Faulkner’s books.   The path will empty around the rear of the small but very interesting University Museum, which contains the collection of Seymour Lawrence, the great publisher who lived in Oxford toward the end of his life, which contains J. P. Donleavy art and Russell Chatham paintings that have appeared as dust jacket art on books by Jim Harrison and Rick Bass, among others.

Adjacent to the University Museum: the home of Stark Young, the early 20th century poet, novelist, translator, essayist, and theatre critic. It was Young who arranged for Faulkner his first job outside Oxford, in a New York City bookstore, a job that, like most Faulkner occupations outside writing, did not last long.   From there it is a scenic ten-minute walk past the Grove and Lyceum to the Archives and Special Collections on the second floor of the University of Mississippi Library, which displays material related to Faulkner and other Mississippi writers, and holds substantial collections of work from Larry Brown, who lived in Oxford most of his life; Barry Hannah, who lived in Oxford from 1982 until his death in 2010, and Willie Morris, who lived on the campus of the University of Mississippi from 1980 to 1990.

About five blocks northeast from the Square is St. Peter’s Cemetery, where Willie Morris regaled students and guests with Civil War tales and ghost stories.   Here lie the Faulkner family plot; William and Estelle Faulkner’s plot; the solitary grave of Caroline Barr, Faulkner’s “mammy” to whom Go Down, Moses is dedicated; Barry Hannah, author of Airships and Geronimo Rex; A. B. Longstreet http://www.georgiaencyclopedia.org/articles/arts-culture/augustus-baldwin-longstreet-1790-1870, author of Georgia Scenes; Dean Faulkner Wells, author of Every Day by the Sun; and L. Q. C. Lamar, who, while not an author, was a highly regarded orator in the U. S. Senate, a U. S. Supreme Court Justice, and one of eight figures featured in John F. Kennedy’s Profiles in Courage.

Larry Brown is at rest in a private grave, and readers may find some of the atmosphere of his stories by driving around the rural southeast part of the county, where he and his people are from, toward Yocona, Tula, and Toccopola.   John Grisham’s former home, where his family lived when his first several books were published, is now a private residence for University of Mississippi visiting writers. It is a two-story farmhouse set on rolling hills beyond a fence on the outskirts of west Oxford on Highway 6.

Oxford’s literary tradition is upheld today by a number of writers in and around Oxford who thus far have managed to avoid residing in the cemetery.   Many of them sometimes may be found in a favorite watering hole, upstairs at the City Grocery bar, where, behind the bar on a mantle above the mirror, there’s a photograph of Larry Brown, leaning against an old pickup truck, looking for all the world like he’s ready to go low-riding.